Let’s start with this: I’m not married. Whew, glad we got that out-of-the-way. Anyway, I can’t help but wonder that if I was, I might feel a little awkward leaving the cinema after seeing David Fincher’s “Gone Girl”.

It’s hard to imagine a review for “Gone Girl” that can speak on it’s subject matter without ruining any twists and turns that have become so synonymous with Fincher’s work. In the same vein, Fincher is drawn to adapting popular novels (in this case, Gillian Flynn’s work with her book “Gone Girl”) and semi-true life accounts. As if he wasn’t already in his niche, he continues to prove himself with every film, or television show (House of Cards), he produces. He has a way of reminding his audience of the grittiness of life, and the seedy nature of things that are otherwise, quite beautiful. In this case: marriage.

“Gone Girl” stars wooden stick figure, Nick Dunne, played accurately, almost talentlessly in fact, by human tree counterpart, Ben Affleck. He’s a heartless moron that practically asks us to point accusatory fingers at him. He literally cannot stop giving us reasons to lose our trust in him. Oh, yes. And the crime that has taken place is the disappearance of his supposedly murdered wife Amy Dunne, played outstandingly by Rosamund Pike.

The story of “Gone Girl” is sometimes linear, but treasures moments of flashbacks, voiced over by Amy, as written in her own personal journal. We see the exciting early moments of their infatuation with one another, all the way to the disparity and slow-crumble of the emotional connection their marriage once shared. Nick sweeps in as a shining knight of clarity for Amy, as she lives under the dominant expectations of her parents, who have cast Amy into a popular children’s book, starring her perfect counterpart, Amazing Amy. Yes, Fincher has cast us under his spell, and we too feel the unrealistic pressure Amy must have felt under her overbearing parents.

We meet many other characters along the way, including Desi Collings (Neil Patrick Harris) as a convincing, insane ex-boyfriend of Amy’s, Tanner Bolt (Tyler Perry), who is the prototypical lawyer, capable of winning any case given to him. Carrie Coon, as Nick’s devoted sister, Margo Dunne, lead investigator Rhonda Boney, and many, many others. Despite the cast, as the film progresses, and new developments bring themselves to light, we are constantly thrown from side to side. At times, we cannot bring ourselves to convict Nick of this crime, when suddenly, we know he must be innocent. But wait, a new development, and we are begging Detective Boney to arrest Nick and his sister Margo as quickly as possible, then moments later, we are totally unsure of which events are fact, and which are fiction. We are tugged left and right, and this leads to a sense of audience delirious confusion, and unease throughout the entirety of “Gone Girl”.

Even the opening credits appear and disappear in a quick fashion that we aren’t used to in cinema. It’s unfamiliar to us, and this is what draws us in. It’s riveting. It’s unashamed. It’s storytelling in a way we can’t get enough of, and though we require resolution, we’ve already dug ourselves a hole deeper than we bargained for. Fascinating. 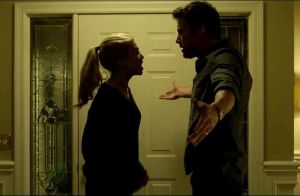 “Gone Girl” is slimed over by a sickly greenish-yellow tint that makes us want to gag. Everything here is untrustworthy.

I can’t speak to the thematics of Flynn’s source material, but Fincher has made short work of analyzing our cultural response to marriage, social media, sex, and many other topics. The Dunne marriage quickly enters the national spotlight, and is torn apart by supposed social media activists who, despite living thousands of miles away and not knowing Nick or Amy personally, feel their opinion is important, or warranted. The media hounds the investigation, with a Nancy Grace-esque character at the forefront. This area of “Gone Girl” feels a bit like a more recent take on Oliver Stone’s “Natural Born Killers”. Fincher speaks very clearly to those of us who parade our opinions around, using social media as an outlet, and tells us that we are indeed morons, and foolish for being so closed-minded and selfish.

“Gone Girl” is sexual by nature, but so is marriage. Is not a glaring difference between a casual friendship, and a committed marriage, sex? Perhaps not by the standing of our hook-up culture, but those critics who have shut down “Gone Girl” on the basis of it being “too sexual,” I can only beg to disagree. Sex in “Gone Girl” tells the relationship of Nick and Amy, it is not included for audience arousal, oh, I would hope it isn’t. While Fincher is a pervert (he admits it), the clever, fitting score, composed by Atticus Ross (Nine Inch Nails, “The Social Network”) moves us to unease, and tells us of the instability of the character’s relationships with one another.

Everything is in constant flux, nothing is even close to certain, and here are multiple scenes from a film I won’t soon forget.

“Gone Girl” is not David Fincher’s crowning achievement in filmmaking, yet knowing just how wonderfully provocative it is reminds us of his past work. In other words, if this isn’t his best, then oh, good Lord, his previous films must be incredible… And they are.